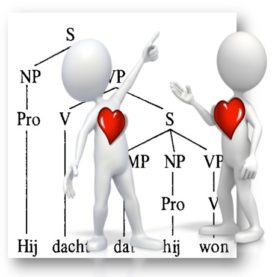 Language is a great tool, an infinitely extendable discrete combinatorial coding system that has amplified the communicative capabilities of Homo sapiens far beyond that of other Great Apes or any other species on this planet. However, as a member of Homo Sapiens, you also happen to be just another mammal, and as such biologically predisposed to have emotions and to communicate them to others. So how does our emotional nature interact with our linguistic one? For example, can we find evolutionary connections between our capability to communicate emotion via facial expressions and our later capability to generate and comprehend speech acts? To what extent is affective information formally coded in syntax? What role does emotion play in semantic composition? How do speakers use prosody to express their emotional stance? And how does reading about other people’s emotion mesh with having one’s own? In this symposium, hosted by the Institute of Linguistics OTS of Utrecht University, experts on emotion and on language will join forces to examine these issues. 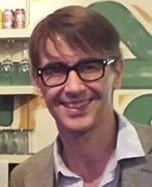 Our keynote speaker is Andrea Scarantino, professor in philosophy at Georgia State University, USA. Andea Scarantino is an internationally leading figure in emotion research, who has written several authorative overview papers on emotion theory as well as many papers addressing specific thorny issues in emotion research (such as on how emotions can cause actions, both rigidly and flexibly). He is also one of the few emotion scholars who have actively explored the links between emotion and language.

The afternoon will be chaired by Marijn Struiksma

We have reached maximum capacity, registration is no longer possible. Please contact Jos van Berkum (j.vanberkum@uu.nl) or Marijn Struiksma (m.struiksma@uu.nl) if you have additional questions.

How is affective information formally coded (“packaged”) in the build of human language? In my talk I will address this question by examining the morphosyntax of a number of Dutch nominal expressions that have an affective-evaluative flavor, such as (i) die ezel van eenJan(litt.: that donkey of a Jan), (ii) datmens(litt.: that[+neuter]human being, ‘that woman’), and (iii) een grootnatuurkundige[-neuter] ‘a great physicist’). At the surface, these expressions have a surprising morpho-syntactic build, specifically: (i) an indefinite article preceding a proper name, (ii) a [+neuter] demonstrative pronoun preceding the noun mens, which is “normally” [-neuter], and (iii) an uninflected attributive adjective instead of an inflected one (compare e.g.: een dikkenatuurkundige (litt.: a fat-infl physicist)). I will propose that these superficial “disorganizations,” which possibly have an evocative effect, have a completely regular (i.e. organized) morphosyntax underlyingly. It will be proposed that the notion of classifier plays an important role in the mapping of an organized morphosyntax onto an apparently disorganized “surface structure”.

Causality is a fundamental concept in language and cognition. In example (1), both the consequence and the cause are actual events that happen in reality, the causality is thus objective; while in example (2), “Heidi must be talented” is one’s opinion, the causality is thus subjective. In languages like Dutch, French, German and Mandarin, the two types of causality are expressed via connectives. In English, it is expressed prosodically (Hu et al. to appear). For example, subjective causals are produced with longer pauses preceding the connective because, and also with higher pitch maximum, and lower pitch minimum, compared to objective causals. Interestingly, in subjective causals, speakers can express different sentiments. For example, the sentiment is positive in (2) but negative in (3). Past work has shown prosody is used to distinguish different sentiments in English (Mairesse et al, 2012). For example, negative stances are expressed with limited pitch variability (Mairesse et al, 2012); positive stances are expressed with higher pitch and longer duration in comparison to negative stances (Levow and Wright, 2017). The question we are interested in is whether sentiment influences prosodic expression of causality in English. In this talk, we will report prosodic analyses on both the connective becauseand the clauses before and after because, indicating an influence of sentiment on the expression of causality in English.

(1) Heidi is thrilled because she won the first prize at the art festival.

(2) Heidi must be talented because she won first prize at the art festival.

(3) Tom is an idiot because he tripped over his shoelaces.

Standardly, the emotive effect of a word is not thought to be part of the descriptive content of that word. Emotive content is traditionally thought to be expressive in nature, meaning that in contrast to descriptive content it does not play a role in the compositionally derived meaning that has the communicative status of being at issue. In contemporary philosophy of language and linguistic semantics, however, the descriptive / expressive divide is treated with considerable skepsis. In line with this, I will show in this short talk that the emotive content of taboo words intrudes on the semantic compositional process. In particular, I will show that the emotional evaluation in intensifier-adjective combinations like “bloody annoying” is no different from other kinds of evaluation, as in “surprisingly annoying”, in the sense that in both cases the evaluation directly influences what would traditionally be called descriptive content.

Language is a powerful combinatorial code for reference. However, that code is used to ‘get things done’ in the world, and, therefore, often used to talk about emotion — our own as well as that of others. This presents a highly interesting puzzle. On the one hand, embodied language processing research suggests that when reading a word like “frustrated”, or “Mark is frustrated”, people use their emotion systems to simulatelexical and referential meaning (e.g., to imagine Mark’s emotion). On the other hand, though, readers usually have their own evaluative feelingsabout what is being referred to, e.g., whether a particular situation is fair (cf. “the bully is frustrated”). How does the secondary, derived use of our emotion systems to simulate conceptual and/or referential linguistic meaning combine with the primary, natural use of our emotion systems in evaluating what people tell us? Do both occur simultaneously? To explore this, we have used EMG-recordings over the frowning muscle, as readers process fictional narratives. Our first results fit the simultaneity idea: readers frown more to “Mark is frustrated” than “Mark is happy” when Mark is a morally good person, but notwhen Mark is bad. However, important theoretical alternatives are still on the table. For example, reduced identification with bad protagonists might lead to weaker language-driven simulation and/or weaker emotional mimicry (contagion).